“To love beautiful linen, is to love fair weather, fair weather that one can acquire and carry home.” – Louise DeVilmorin

I have always been in love with beautiful linens, specifically French linens.   And, finding them over the years while antiquing would always make me giddy as a school girl.  However, I rather like to think they found me.  I believe when we have an appreciation for specific things, they somehow work their way onto our path so we can “carry them home.”

The person behind Saphyr Pure Linen is Rory O’Mara. Rory was the Director of International Fashion Marketing at Cotton Incorporated  for many years. During  her years of traveling she learned Europeans are fond of, and have the luxury of dressing their beds with beautiful linen. Nothing compares to the softness of French linen. 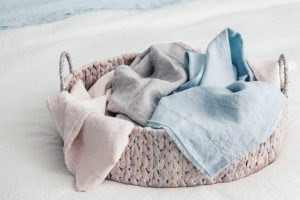 Linen is made from the fibers of the flax plant, and just as a point of interest, Saphyr is the common name for the bloom on the plant.  Rory obtains the linen for Saphyr from the area it is grown and milled, specifically from the coast of Belgium, into France, and on through the Normandy region. Upon the touch of French linen you immediately know you have something quite different and special.  The more linen bedding is used and washed, the softer, stronger, and more supple it becomes. In other words, it becomes better with age.  Also, linen is mildew and moth resistant, non-static, and lint-free.  While it is more costly than cotton bedding, if properly laundered,  it will serve you well for decades.

The French not only spoil themselves by dressing their beds in beautiful linen, they also dress them quite differently than many Americans.  Actually, they are artfully layered, paying great attention to detail.  First, a stuffed and quilted mattress pad tops the mattress, followed by two flat linen sheets (the French are not accustomed to fitted sheets).  Last, a blanket covered by another sheet.  In the winter months the blanket is replaced by a couette (comforter) which is filled with duvet.  Duvet or down, comes from the soft feathery underbellies of geese.  The couette has its own covering, often referred to as a duvet cover.  When the middle sheet is folded back, it most always reveals an embroidered monogram or family crest.  This is embroidered with great care in order for it to be easily read standing at the foot of the bed.

A French bed would not be completely dressed without un traversin – a long firm pillow (round bolster) which spans the width of the mattress.  The traversin may also be wrapped in a blanket cover or in its own, specially made case and will always support European square pillows (26″ x 26″).  Additionally, the European square pillows are often embellished or monogrammed. 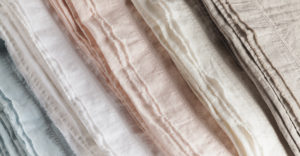 The French are famous for their love of home and striving to acquire the best. They will save their pennies for fine workmanship, rather than to quickly squander their funds on anything not of quality. This very attention to detail is what makes Saphyr Pure Linen special.  So today, I am offering you a treat.  A GIVEWAY !  A standard/queen size set of Saphyr Pure Linen pillowcases in fresh white.   To enter:  Complete one of the following sentences.

All entries must be received by Friday, May 26, 2017.  Leave your answer to the sentence, along with your first name under the comment section of the blog.  The winner will be announced on Tuesday, May 30, 2017.

Thanks for visiting, enjoy your week !

Notes:  This post was not sponsored by Saphyr Linen.  Although, I greatly appreciate their assistance with photos and information regarding Saphyr.  All photos used in this post are with permission of Saphyr Pure Linen.  To order from Saphyr Pure Linen or to visit their website go to:  https://saphyrpurelinen.com/  You will be glad you did!

15 Comments on "The Allure of Beautiful Linens"

I am interested in linen because…in all my vintage pillow cases, I do not know if I have any French linen, this could be a wonderful new discovery for my blush pink guest room re-do!

I love love love linen because when I wear it I feel the easy breezy flow surrounding me like a cool wind on a hot summer day.

I would love to get a good nights sleep surrounded by linen!

The beauty of this blog is: I actually get to enjoy Sandra’s efforts. Occasionally she mists the bed with lavender water, which is noticeable as soon as my head hits the pillowcase.

I love linen because it is so versatile. I sew and you can use it for clothing, drapes, and pillows. It is cool to the touch, it can be dyed, it can be embroidered, it can be beaded, and it gets better with wearing and age!

There is nothing so luxurious as slipping into a beautifully made bed with fresh ‘linens’. I am interested in linen because I’ve never had actual linen for my bedding (I use the phrase loosely in this case). I’m excited to learn more and to be included in this real linen give away. Thank you, Sandra.

I love linen because it is one of the things that deeply satisfies my senses of sight and touch and feeling of luxury and well-being.

I LOVE linen because it looks so soft and comfortable. Thank you for the chance to win!

I love linen because of the feelings it inspires. Feelings of heritage, home and childhood. My grandmother made our pillowcases special by adding embroidery and our initials. Our linens were always percale, and smelled so sweet….although I have never had French linens, I feel connected in a sense, as my maiden name is French! Thank you, Sandra, for all your articles!

I am interested in linen because it is so beautiful and stitches up so pretty. It always reminds me of summer because it is so cool and refreshing. I would love to learn more about using linen.

I love linen…because the best part of linen sheets is that they get softer and more beautiful with use. They keep you cooler in the summer and warmer in the winter. The soft touch and feel of natural fabrics can be a luxurious source of comfort, especially as we’re going to sleep and leaving the thoughts of our busy days behind us. Spritz the linens with Lavender and it’s a sure remedy for a restful and peaceful slumber. Thanks Sandra for your wonderful blog and this generous opportunity.
Linda Y-G ?

I love linen pillowcases and bedding for the sheer elegance, softness and pure luxury of the material. Today many beautiful patterns can be found in linen duvets and matching shams as well. I love the “bird” chinoiserie patterns that are being brought back to the marketplace with matching shower curtains, soap dishes and the like. Your post Sandra is all about # naturally chic french living!

I am interested in linen because it seems to be the most wonderful bedding for a good nights sleep. I have only read about it.. I would love to win this giveaway to experience the luxury of pure linen. Linen would possibly make me feel great at my age..69.this yr. Thanks

I have never slept on linen bedding either, but it sounds wonderful. (Some of Sandra’s lavender water would be great with that!) I love linen clothing because it is cool and comfortable, wears forever, and never goes out of style. For curtains and dust ruffles, I love the appearance of natural linen as well. To me it adds an element of sophistication without being fussy.

Romance of the Ordinary |
Share On TwitterShare On Google

[…] Do you remember, back in May I wrote a post about beautiful linen, specifically French linen? visit here  A bed dressed with beautiful French linen, is a marvelous bit of romance we can choose to enjoy […]