”The preparation of good food is merely another expression of art, one of the joys of civilized living.” ~ Dione Lucas 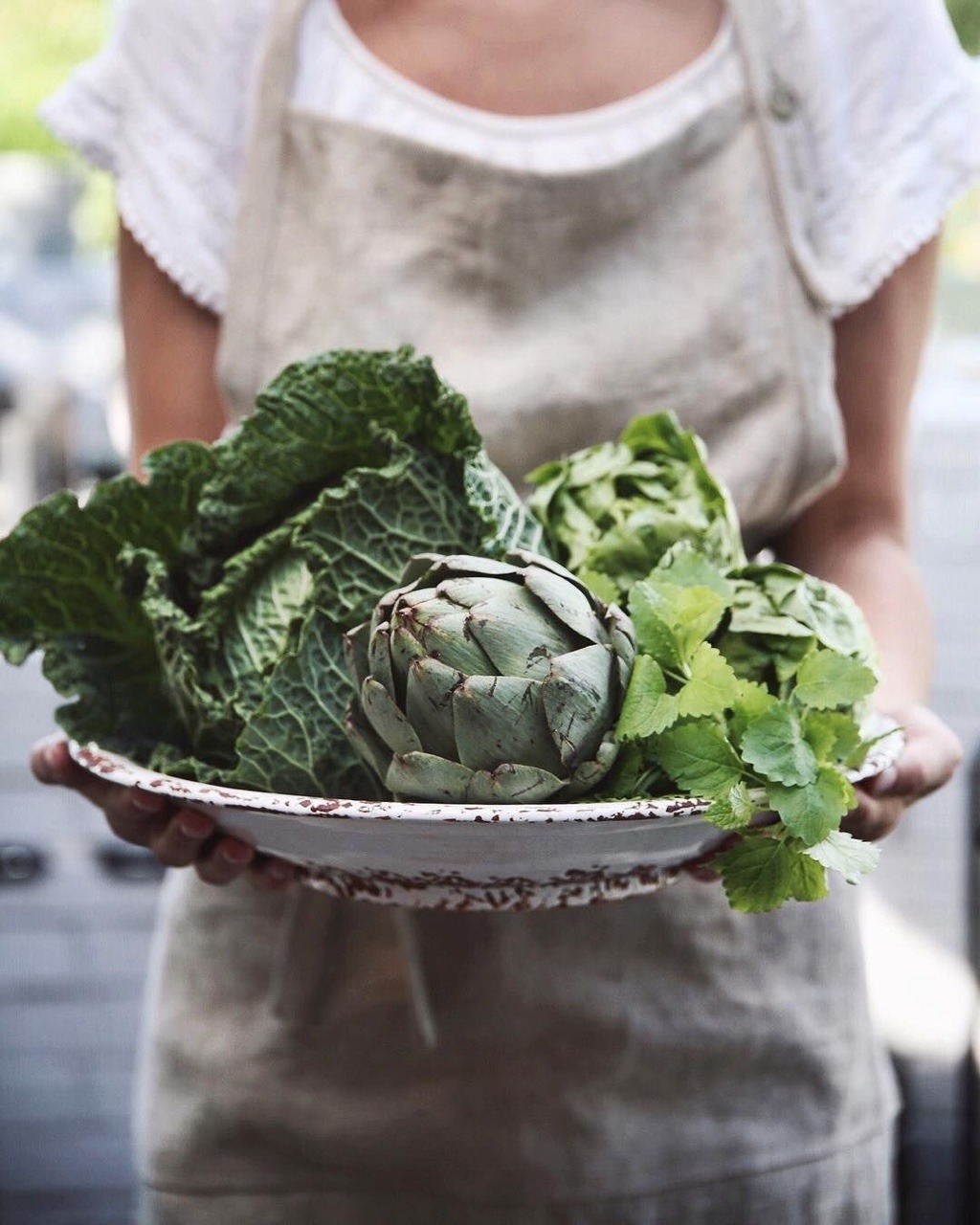 Good morning, sweet friends.  First, let me apologize for my tardiness as my February ‘At Table’ post is a week late.  February has truly moved right past me.  That said, today I would love for you to join me on a little trip to Louviers, France where we will meet up with an American ~ Chef, Susan Herrmann Loomis.

Loomis was born in Orlando, Florida and her father was career military.  Her childhood years were spent traveling, due to her father’s career, throughout the United States and abroad.  However,  Seattle, Washington is the place she referred to as home.

After graduating from college and working a year in public relations, Loomis decided that if she was going to write about food, she should learn how to cook.  She located a cooking school for English-speaking students in Paris and they agreed she could work at the school in exchange for tuition.  Therefore, in 1980 at age 25, Loomis moved to France, where she met her mentor, Patricia Wells, a food writer for The New York Times.  Loomis agreed to help Wells test recipes, thus the two developed a long working relationship.  And, a personal friendship.

After several trips back and forth to the States, living for a few years in Seattle, Loomis made the decision to return to France permanently.  And, France has been her home since 1993. 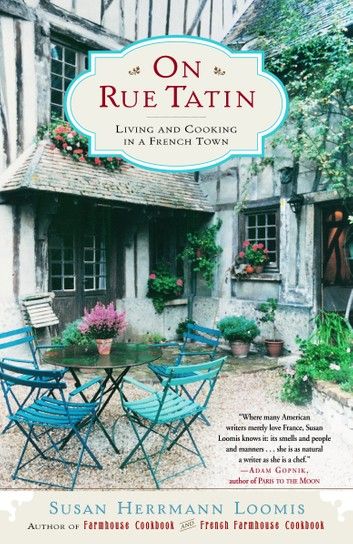 I first became acquainted with Loomis via her book, “On Rue Tatin,” ~ a gift from my husband.  The book is full of charming and captivating tales and is ‘delicious’ with recipes.  It is also the story of how she and her former husband lovingly-restored an old convent in the center of Louviers which was nearly destroyed by German bombs during the war.  During the time they were restoring the convent, they were the only Americans living in the village.

“A good cook is the peculiar gift of the gods.  He must be a perfect creature from the brain to the palate…” ~ Walter Savage Landor

Currently, Loomis divides her time between Paris and her restored convent in Louviers.  She is the author of nine books and her latest is Nuts in the Kitchen.  Additionally, she has become an internationally-recognized expert on food and owns and operates ‘On Rue Tatin’ where she teaches cooking classes.  She also serves as a guest instructor at various cooking schools in the United States.

“Cooking is one of the great gifts you can give to those you love.” ~ Ina Garten

Now that you have met Susan Loomis, I feel certain you must be curious about a few of her recipes.  The recipes I am sharing are from her book On Rue Tatin and they have been tested and approved by Mike Lambiotte, (official taste tester at ‘Maison de Jardin’).  I hope you will give them a try.

The first recipe is ‘Braised Chicken in White Wine and Mustard.’  This recipe is from Monsieur Richard, who was ‘the’ butcher in Louviers.  And, it produces a perfectly crisp chicken in a marvelous sauce, wonderful over mashed potatoes.

Preheat oven to 375.  In a small bowl, whisk together wine and mustard, set aside.  Heat olive oil in a large ovenproof skillet.  Once the skillet is hot, brown the chicken on both sides. Turning only once and this will take about 8 minutes.  Remove the chicken from the pan and add onions to the pan.  Stir and cook until they are tender and turning slightly golden.  Return the chicken to the pan, sprinkle with salt and pepper.  Pour the wine mixture over the chicken and place the pan in the center of the oven, bottom shelf.  Then bake for 1 hour at 375.  Transfer the chicken to the serving pan.  Pour the sauce over the chicken or into a separate serving dish.  Recommended Wine ~ Red Burgandy.

This is one of Loomis’s go-to recipes when “dinnertime sneaks” up on her.  She serves this with green beans and a large salad.  Recommended wine ~ Sauvignon Blanc.

Notes:  This omelette (French spelling)  is not folded over, but is served “in the round,” like a pizza.  It is lovely on the plate, with a garnish of fresh parsley or other garden herbs.  Also,  French omelettes are runny. If you prefer your eggs cooked through, you may want to cover the pan so that the egg cooks on top as well as the bottom. Before you do that, though, try an ‘omelette’ the French way, because you are likely to find it scrumptious.

I use Yukon Gold potatoes and do not peel them.

In a medium-sized bowl, whisk the eggs until they are just blended. Whisk in salt and pepper to taste.

Crumble the goat cheese over the potatoes and the bacon.

Mince the chives and sprinkle all but 1 tablespoon of them over the potatoes and the bacon.

When the omelette is generally set but still somewhat liquid, or when it is cooked to your liking, place a large plate on top of the pan, and turn the pan so the omelette falls onto the plate. Garnish it with more chives and serve immediately.

Note:  If you want to prepare something truly lovely and special, I highly recommend this fabulous dessert.

1/3 cup (5 tablespoons) mild but perfumed liquid honey, such as lavender

Preheat oven to 400. Butter and flour an 11-inch round baking dish. (Do not use a smaller dish.)

Arrange pears in an attractive pattern in a baking dish. Drizzle evenly with honey.

Separate 3 of the eggs, reserving egg whites. Whisk together egg yolks and the whole egg, add milk and set aside.

In a large bowl, mix flour, 3 tablespoons sugar and the salt.

Make a well in the center and gradually add egg and milk mixture, beating until you have a smooth batter. Quickly but thoroughly, whisk in melted butter.

Whisk egg whites with a small pinch of salt until they are foamy. Add 1 tablespoon sugar and continue whisking until soft peaks form.

Fold egg whites into the batter, then pour batter over pears. Bake in center of preheated oven until the clafoutis is puffed and golden, about 30 minutes.

Remove from oven and place on a wire rack to cool.

To make the caramel, heat the remaining 2 tablespoons sugar with the water in a small, heavy saucepan or cast-iron skillet over medium heat, shaking pan occasionally to evenly distribute the sugar, until mixture turns a deep golden brown, which will take 3 to 5 minutes.

Don’t stir sugar, which might encourage it to crystallize; just rotate the pan so sugar and water caramelize evenly. When the sugar has caramelized, drizzle it over top of clafoutis. Wait about 5 minutes so the caramel hardens, then serve.  We enjoy this with a dollop of Crème fraîche.

“The art of cooking ~ it’s when you mix craftsmanship at the highest level with creativity.” ~ Chef, Eric Ripert

Many thanks for your visit and I hope you have enjoyed our time together.  Susan Loomis is an amazing and talented chef.  Perhaps, if you were not familiar with her, after today you may decide to research her and her books a little further.  I don’t feel you would be disappointed. 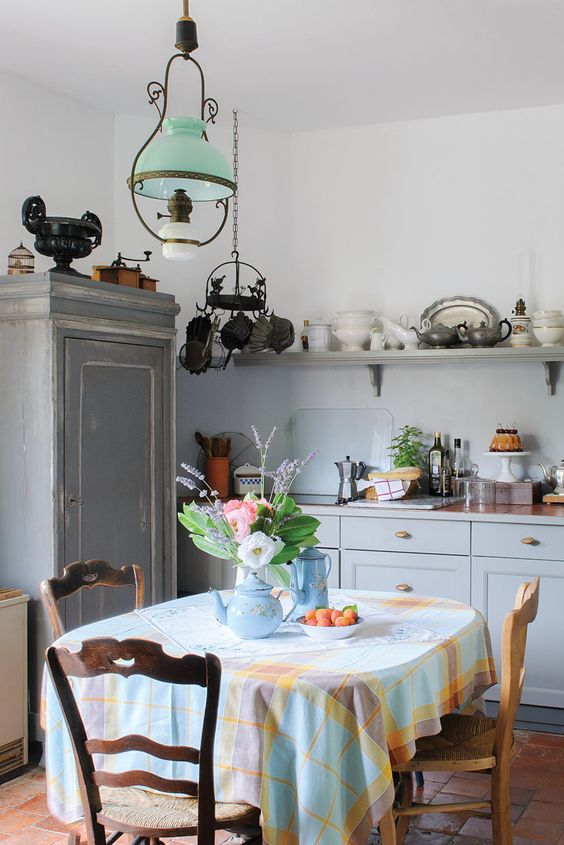 Wishing you a lovely day and happy times ‘At Table.”

Note:  All wine suggestions are from Susan Loomis.