“There are times when wisdom cannot be found in the chambers of parliament or the halls of academia but at the unpretentious setting of the kitchen table.” ~ E.A. Bucchianeri 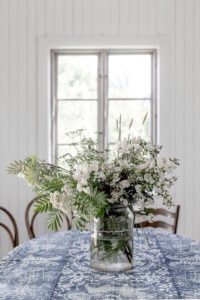 Good morning, dear friends.  And, welcome to ‘At Table.’  This month we will be joining Dorie Greenspan, Around Her French Table.  Now, you may or may not be familiar with Greenspan.  Therefore, today I will share some of what I have learned about her, all of which has come from my reading and from preparing her delicious recipes.  Make yourself comfy, find your coffee/tea, and join me ‘At Table, with Dorie Greenspan.’

“Sometimes I think there are devils at work in the kitchen ~ recipes that are always perfect sometimes come out less than perfect and I can’t figure out why.” ~ Dorie Greenspan 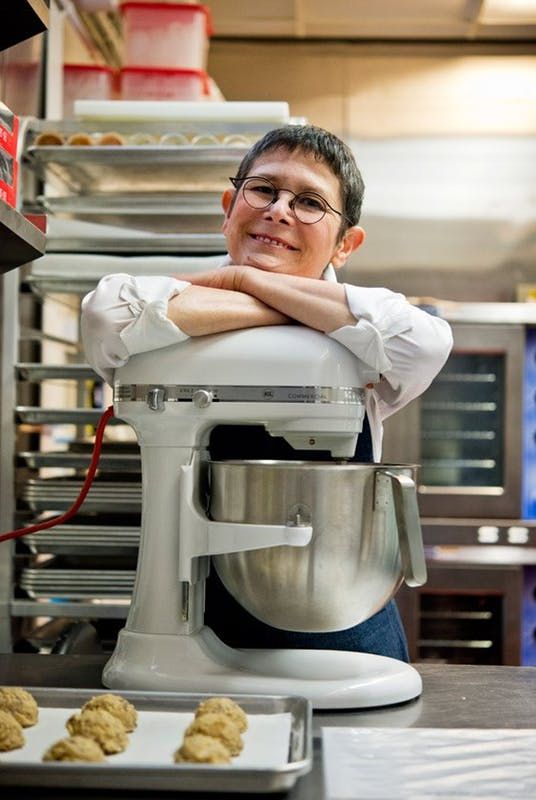 Most likely, one would consider anyone who had burned down their parent’s kitchen at age twelve as one who would probably not go on to become a famous chef or one who would write wonderful cookbooks.  However, that is exactly what happened to Dorie Greenspan.  Although, the kitchen fiasco did prevent her from venturing into the kitchen again until after she was married.  Oh, but when she stepped into the kitchen again, she never stopped cooking or baking.   And to this day, she continues to enjoy her career.

Greenspan is the winner of five James Beard Awards.  They are as follows: One for journalism,  one for her books ~ Baking With Julia, Baking From My Home to Yours, Dorie’s Cookies, and one for being voted into the Who’s Who of Food and Beverage in America.  Additionally, twice she has won the Cookbook of the Year Award from the International Association of Culinary Professionals.  Once for Desserts by  Pierre Hermé and once for Around My French Table.  She has also been on the New York Times Bestseller List twice.  Once for Around My French Table and once for Baking Chez Moi.

Greenspan, who considers herself very fortunate, was born in Brooklyn, New York.  Today, she splits her time between New York, Connecticut and Paris.  She has been married to her husband,  Michael since her junior year of college and they have one son, Joshua.  She is the “On Dessert” columnist for the New York Times Magazine,  a contributing editor to Parade Magazine, a long-time contributor to Bon Appétit, and the food critic for the Louis Vuitton City Guide:  New York.

“I always feel that when I send a recipe out into the world, I’m asking you to be my partner in making it…”  Dorie Greenspan 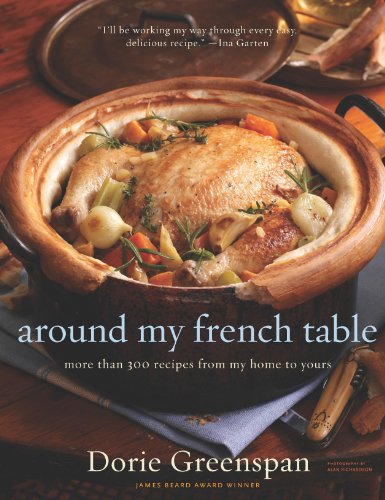 Now, I am sure you are anxious to see recipes I have selected from her outstanding book, so I will stop the chatter and get on to a few of my favorites.  I hope you will enjoy them as much as we do.

The easiest way to describe gougères is to call them cheese puffs.  Gougères are made all over France, but they originated in Burgundy where they are always the first thing you receive when you sit down in any restaurant.  They are delightful with a glass of Champagne.

Note:  These can be frozen in dough form and placed in the oven directly from the freezer.  Nice to have on hand for something to serve at the spur of the moment.

1 1/2 cups coarsely grated cheese, such as Gruyère (my favorite) or cheddar.

Position oven racks to divide the oven into thirds and preheat the oven to 425.  Line two baking sheets with parchment paper.  Bring the milk, water, butter, and salt to a rapid boil in a heavy-bottomed medium saucepan over high heat.  Add the flour all at once, lower the heat to medium-low, and immediately start stirring energetically with a wooden spoon or heavy whisk.  The dough will come together and a light crust will form on the bottom of the pan.  Keep stirring – with vigor- for another minute or two to dry the dough.  At this point, the dough should be very smooth.

Turn the dough into the bowl of a mixer fitted with the paddle attachment.  Let the dough sit for a minute, then add the eggs one by one and beat, beat, beat until the dough is thick and shiny.  Make sure that each egg is completely incorporated before you add the next, and don’t be concerned if the dough separates.  By the time the last egg goes in, the dough will come together again.  Beat in the grated cheese.  Once the dough is made, it should be spooned out immediately.  Using about 1 Tbls. of dough for each gougère, drop the dough from a spoon onto the lined baking sheets, leaving about 2 inches of puff space between the mounds.

Slide the baking sheets into the oven and immediately turn the oven temperature down to 375.  Bake for 12 minutes then rotate the pans from front to back and top to bottom.  Continue baking until the gougères are golden, firm, and puffed.  Another 12 to 15 minutes.  Serve warm or transfer the pans to racks to cool.

Note:  According to Greenspan, when you are an American in France, there is nothing more flattering than to have French people ask you to share your recipe for one of their national treasures and she has had this recipe requested over and over.

“Sitting down to a meal together draws a line around us, it encloses us and strengthens the bonds that connect us with other members of our self-defined clan, shutting out the rest of the world.” ~ Miriam Weinstein

Greenspan considers this recipe, Une Petite Merveille (a little marvel).  It was given to her many years ago by Jacques Drouot, the mâitre d’ hôtel at the famous Le Dôme brasserie in Paris.  She has been preparing this recipe for her family and friends ever since it was given to her.

2 carrots, trimmed, peeled, and thickly sliced on the diagonal

Center a rack in the oven and preheat the oven to 450.  You will need a heavy casserole with a tight-fitting cover, one large enough to hold the chicken snugly but still leave room for the vegetables.  A cast-iron enameled dutch oven is perfect.  Put the casserole over medium heat and pour in the oil.  When it is warm, add the vegetables and turn them in the oil for a minute or two until they glisten; season with salt and white pepper.  Stir in the herbs and push everything toward the sides of the pot to make way for the chicken.  Rub chicken all over with salt and white pepper, nestle it in the pot and pour the Armagnac around it.  Leave the pot on the heat for a minute or so to warm the Armagnac, then cover it tightly.  If your lid doesn’t fit tightly cover it with foil and place on the lid.  Slide the pot into the oven and let the chicken roast undisturbed for one hour.

Transfer the pot to the stove and carefully remove the lid and foil, if you have used foil.  Make sure to open the lid away from you as there will bee a lot of steam.  Transfer your beautifully browned chicken to a warm platter or large shallow bowl.  Using a spoon, skim off the fat, and discard it.  Pick out the bay leaf and discard also.  Turn the heat to medium and add the water, stirring to blend with pan juices.  Simmer for about 5 minutes or until it slightly begins to thicken.  Taste for salt and pepper.  Carve the chicken and serve with vegetables and sauce.

Note:  Bonne Idée (good idea)  Armagnac and prunes are a classic combination in France.  If you like, you can toss 8-12 prunes (pitted or not) into the pot along with the herbs.  These make a sweet and lovely addition to the mixture.  The prunes often simply melt during the cooking process.  You won’t be sorry you tried this.

“Desserts are the fairy tales of the kitchen, a happily-ever-after to supper.” ~ Terri Guillemets

Gently melt the chocolate in a heatproof bowl over a saucepan of simmering water or in a microwave oven on medium power.

Transfer the chocolate to a bowl that can hold all ingredients.  Using a whisk, stir the egg yolks into the chocolate one at a time.  In a separate bowl beat the egg whites with salt until they start to form peaks.  Beating all the while, gradually add sugar.  Continue to beat until the whites are shiny and hold medium-firm peaks.

Spoon the mousse into individual serving bowls and serve or refrigerate until you are ready to serve.  Cover with plastic wrap, making sure the wrap touches the mousse to prevent the top of the mousse from hardening. 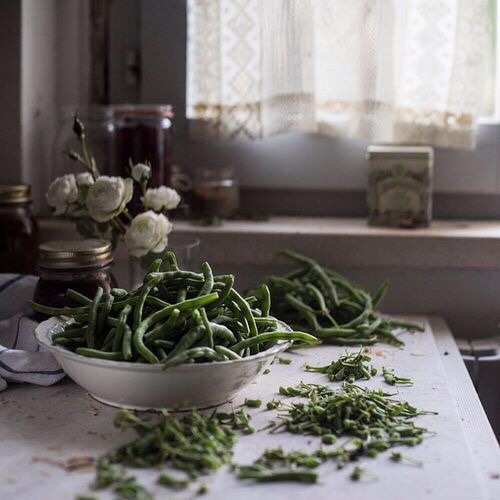 “I don’t know if there is a method that I’d like to see younger people bring back, I just want to see everyone of every age in the kitchen.” ~ Dorie Greenspan

Dear Friends, I hope you have enjoyed your time ‘At Table.’

Wishing you a wonderful day

Only happy times in the kitchen!

Recipes:  All are from, Around My French Table, by Dorie Greenspan

14 thoughts on “At Table ~ With Dorie Greenspan”