“A letter is a blessing, a great and all-too-rare privilege that can turn a private moment into an exalted experience.”  – Alexandra Stoddard 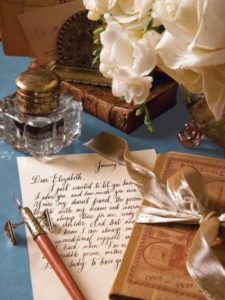 In previous centuries, most letters were written out of necessity.  Through these letters, business was conducted, sympathies were conveyed, friendships were nourished and family ties were maintained – despite separations due to distance and war.  During such times, letters were a great source of comfort and a sense of connection to one another.  Lives lived through letters.  And, before many people had the means to travel, letters provided information about distant lands.

Letters can also become treasured keepsakes.  I have stacks of letters from my dear mom.  She wrote to me almost every day the many years we lived in Virginia.  Mostly, they were a note she would write while enjoying her morning coffee.  Things such as:  “Honey, you would love it here this morning, it is snowing.” Or,  “Oh, I wish you were here, the spirea and the rhododendron are magnificent.”  One special letter held a beautiful maple leaf.  Mom knew the fall of the year was always a difficult time for me, because fall in coastal Virginia is not brilliant with color, as is the state of West Virginia.  The tree which produced the beautiful leaf, the house the tree sheltered, and my precious mom are all now gone.  But her letters and the beautiful leaf are among my most treasured possessions. 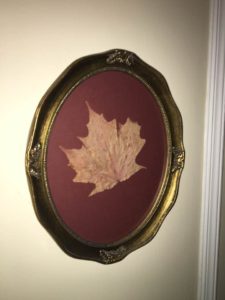 Letters can also answer questions and tell about lives of those related to us, but perhaps never really knew.  I recently read an article by Brendan Mathews, about his paternal grandparents.  He received a box of letters from a cousin and for him, it was like opening a “treasure chest.”  Reading the letters exchanged between his grandparents during World Ward II, he gained information about their lives and love for each other he never knew.  And, had the letters been tossed, he never would have known.  visit here

In our increasingly mechanical and impersonal world, now more than ever, the handwritten note or letter is of great significance. Something as simple as a handwritten invitation, thank-you note, or a note to say hello is a sincere statement of thoughtfulness, love and affection.  John Donne said, “More than kisses, letters mingle souls.” I know his words to be true, and if you have been the recipient of sweet letters, then you do also.  So, the next time you are out and about, purchase some lovely note cards or writing paper, cheerful stamps and a pen that writes well.  Write to your friends and family.  Your notes and letters could mean far more than you know, and they just may become treasured keepsakes.  In closing, I can think of no better way to say ‘au revoire’ than with the words of Emily Dickinson, “My letter as a bee, goes laden.  Please love us and remember us.  Please write us very soon, and tell us how you are.” 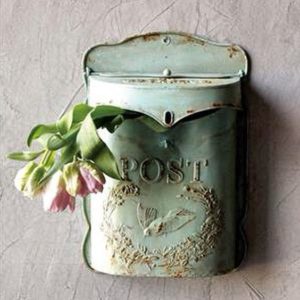 Do write to me, I love to read your comments.

Thanks for visiting, and have a wonderful day !

Notes:  Brendan Mathews is the author of The World of Tomorrow, named as Editors Choice by the New York Times Book Review.

Gift of a Letter, a book by Alexandra Stoddard

We King kids found several stacks of letters our Dad wrote to our Mom and our Grandmother during WWII. It gave us a glimpse into our parents particularly Dad at 19 yrs. old. What a gift.
Our brother used Dad’s letters along with other of his Navy memoribila, complied a timeline of Dad’s Ticonderoga service and the 1944-1946 cultural(revealed in his letters). We donated these letters/memoribila to the WWII Museum in New Orleans.

You and your siblings did indeed receive a gift by finding the letters your Dad wrote. As children, we never realize or think what our parents would have thought or been like at the age of 19. I can’t comprehend being that age and being in the middle of war. How wonderful that your brother compiled such a special timeline of your Dad’s military service, and that it was put in a museum where it will preserved and where others can enjoy and learn from it.

Aw the sheer joy of a letter in the mail! Thank you Sandra for reminding me of how much we are missing with emails and text messages! The lveliness of this post has inspired me to write a letter to my elderly aunt. Thank you for your gift of beauty!

Pam, so pleased you enjoyed the post and that it served as inspiration for you. I am sure your aunt would be thrilled to receive a letter from you.

Sandra, You have inspired me to write my grandson who is 15. I just received a hand written thank you note from him for his Christmas present.

Bonnie, I am certain your grandson would be so happy to see a letter addressed to him in the mail. And, how wonderful that he wrote a thank you to you for his Christmas present. That is a treasure to you, I am sure.

I love writing letters and notes and sending cards…I guess i am old school…I feel it so much more personal….I truly do not not e-cards!…I feel it so impersonal….I want someone to feel that I took the time to chose a card and write a note.

Shirley, I so agree with you. Perhaps, I am old school too, but a note or letter written on a lovely card speaks volumes to me. Happy to see you here.

Guest
Brenda+@+It\'s+A+Beautiful+Life
Share On TwitterShare On Google
I can’t believe I didn’t respond to this gorgeous email with reference to our mutual favourite, Alexandra Stoddard. A lovely, lovely post. Love that post box photo. You ask when was the last time I received a gift of a letter, and I am happy to reply not so long ago. Just shortly after Christmas, my niece in law sent a letter to thank me for a book I’d sent her, and her comments about what she was enjoying from the book and references to things I’d shared in my own letter to her. I have a feeling we could… Read more »
Vote Up0Vote Down  Reply

Brenda, so happy you enjoyed the post. You are correct, “kindred spirits don’t notice age or generation differences.” I know she will be thrilled every time she sees a letter from you in her mail.